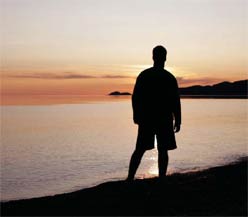 As boys watch their fathers, an imprint of how to be a man develops within them. Some boys experience their fathers as too often aggressive. Some others experience their fathers as emotionally and physically absent from their lives. Both of these types of boys mature with a longing to feel whole, connected, strong and lovable within their masculinity, but lack an inner imprint that would help them to fulfill their longing. They often deal with this by numbing a part of themselves.

As these boys enter adolescence, they become further defined by the social culture of 6th through 12th grades. During those years, many of them experience a culture of violence and verbal aggression, valuing physical toughness and power, and denying feelings and vulnerability. This culture is often played out in a group (or team) setting, with boys trying to find their place, for both safety and fun. The cost for belonging is often a further numbing, typically asking the boys to deny some aspects of self-respect and respect for others. For most boys, these themes continue to define how they live into their adult years, guiding them in ever more refined, but limiting, ways.

This is problematic not just for the intense (but quiet) pain that many men carry, but also as it leaves them unprepared for facing the issues of adulthood. There are a number of issues that men face that are daunting. They include:

If men haven’t had experiences of positive male role models it can be very difficult to come up with satisfying resolutions to these issues. There isn’t one set of answers that will resolve these issues; it’s about learning what one’s own personal way is. Rather than finding one’s place in the group and then understanding one’s way, it’s about finding one’s place in Life, and then using that knowledge to find the context and way in which one can live one’s gifts. How does a man do that? In part, by recognizing the richness that they’ve lost by being disconnected from their sensitivity.

Men often talk derisively about being sensitive, saying that it means crying more. Sensitivity is about more than just expanding one’s emotional palette. It’s about connecting to and feeling the unique qualities that are our gift when coming into this life and that continue to arise within us as we experience life. The advantage of being sensitive is that men can express themselves through their lives in ways that naturally evolve, helping them to continue to find their place within life. As they age and experience the ripening of their inner capacities, the changes in their physical body, and the growing complexity of relationships, they can evolve in a way that allows them to maintain their connection to themselves and the whole. While disconnected men often turn to women for experiences of sensitivity, it’s by sitting with a man who can reflect back one’s masculine self, that one can discover one’s real masculinity and one’s gifts to the world.

Men and the Water of Life by Michael Meade
Iron John by Robert Bly
Dark Hearts: The Unconscious Forces That Shape Men’s Lives by Loren Pedersen
The works of Michael Gurian, Douglass Gillette, and Robert Moore